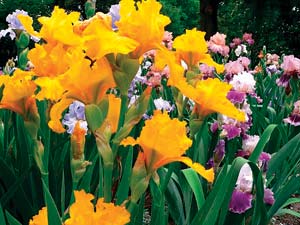 IRIS: Dividing iris (as well as daylilies) allows room for the plants to grow and produce new shoots, which will yield nice blooms.

First there is despair. The knowledge that some of the plants in the garden that provided a beautiful landscape over the past months will succumb to the hot, dry winds by displaying scorched and tattered foliage is depressing. Hostas and ferns will be the first to suffer, and even frequent watering will not prevent these foliage plants from showing signs of stress.

My container annuals will be the next to display symptoms of the weather. No matter how many times I promise I won’t let these mini landscapes get too dry, it always happens – on a hot, windy day in August. I may be able to bring the plants back with a little TLC and fertilizer, but they never regain the gloss and color they previously had.

On the other end of the spectrum, though, there’s a sense of joy and accomplishment when you see the tomatoes, peppers and other vegetables crowding the refrigerator, waiting to be canned, juiced or frozen.

Even with all of the problems that may have plagued the vegetable garden in the beginning stages, there always seems to be more produce than one family can consume. This makes me feel as though I’ve accomplished a lot; it brings joy to be able to give family and friends some of my harvest.

August is not only a time for harvesting from our vegetable gardens, but also from our landscape gardens.

Daylilies and iris can easily be divided, moved and given away during this month. Even though these plants can be moved at almost any time of the year, dividing and moving them now will give you a better chance for good blooms next season. This is because the plants are not expending energy to bloom; instead, they are sending more roots out for next season. This schedule also gives the new divisions time to root well before the frosts of winter try to heave them from the ground.

Both iris and daylilies begin to reduce the number of bloom stalks they send up when they become too crowded.  Dividing them allows room to grow and produce new, vigorous shoots that produce nice blooms.

Iris plants need to be lifted from the ground, and the various rhizomes need to be separated before you replant them. When replanting them, place them just under the surface of the soil. Pieces that have three- or four-leaf shoots coming off the rhizome will do best. They will bloom quicker and nicer than those with only one or two shoots. A good place for the old rhizomes from the center of the planting, as well as those that are soft or damaged, is the compost bin.

Daylilies are easier to divide than iris, since you really don’t need to take great care in separating the roots. Use a spade to pop the planting up, and then divide it into as many divisions as you want. Another way of dividing a daylily is to leave the main portion of the plant in the ground, and then use a spade to remove the outer areas.

The divisions of both iris and daylilies should be kept moist if they’re not going to be replanted right away. Damp peat moss or moistened newspaper will keep the plants from drying out until they are replanted.

I generally cut back the foliage of the divisions to about halfway. This helps me in two ways – it keeps the plants from using too much water to support all of the foliage with a damaged root system, and it also makes the plants look better, especially daylilies, which will be lanky after growing closely together.

Even if some of my garden plants begin to look a little shabby this month, I’ll still feel a sense of accomplishment and joy. It’s a nice tradeoff to have plenty of vegetables and plant divisions going to family and friends.