I’m a “take it or leave it” camper, with an emphasis on the leave it, but since I’ve been involved with Girl Scouts on and off since the mid-80s, I have spent a good deal of time inside tents (family size, backpacking, platform), cabins, screened porches and I’m sure other structures I can’t easily remember.

I’ve enjoyed my time tramping through the woods avoiding poison ivy, canoeing, generally doing lots of outdoor crafts and, of course, eating and cooking food, but if I wasn’t with the Girl Scouts I wouldn’t be there at all. With such an ambivalent attitude to camping you’d think I would be the one jumping on the gourmet camping bandwagon; making food less outdoorsy, more homelike. Not so. I actually have a more backpacking mentality when it comes to group food; less is better. Unfortunately, most other leaders have a different concept of food in the woods.

My life with Girl Scouts began about the time elaborate wooden camp boxes were on the way out. I saw a few with neatly labeled shelves for the supplies. Sure, the boxes were organized but they were heavy. Through the years, most leaders have turned to plastic totes for carrying the supplies into camp. As a “less is more” fan, this works for me.

Granted, I can understand the pride a Brownie has cooking her own breakfast on the top of a #10 can. As the adult who rounded up the cans, punched the holes for ventilation and made sure there were enough tuna or cat food cans to put the fuel in, I can honestly say “once was enough.”

Food, like most activities in Girl Scouts, is about progression. Take Silver Turtles, a campfire staple. As a leader, what I remember is that if the leaders had already sliced up the potatoes and gotten the meat into a reasonable portion size, a Brownie could quickly pile on the chosen ingredients before an adult made sure the sides were folded tight. Then another adult placed the aluminum packet on the coals and removed it when done. In their minds, the girls had cooked the entire meal. They were happy and proud campfire cooks. It got easier as the girls got older and could do their own peeling, slicing and cutting. They also got more creative with their foil wrapping. Swans would paddle onto the fire. Fish shapes swam into the heat. Perhaps a triangle or trapezoid would identify whose food it was.

If it was left up to me, we would have arrived with a large cast iron skillet, and every meal would have been cooked in that one pan – with the exception of dessert, which would be a 3-ingredient cobbler in a cast iron Dutch oven. Yes, there would be s’mores, but technically s’mores aren’t dessert. S’mores are a neccesity, every night.

One trip, a particularly creative leader came prepared with oranges for everyone. The tops had to be sliced off, the middle scooped out and added to a dry muffin mix. Everything was then spooned back into the orange, wrapped in foil and placed on the glowing embers. A lot of work, especially considering only one person actually ate the resulting breakfast (it wasn’t me).

Girl Scouts have been proud campers since 1912. I’m glad I got a chance to be part of the movement, and I hope they continue cooking for another 100 years.

Giving our grandchildren their first ever campfire was a joy. 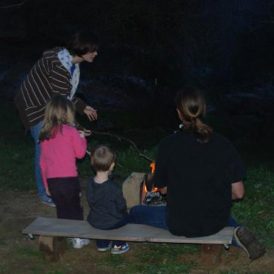 Improvising When You Live in the Middle of Nowhere

When I couldn’t find the right sized tablecloth just a day before having 12 people over for a ministry meeting and lunch, I had to figure out how to make one with materials I keep on hand. Because the nearest department store is an hour away, buying one wasn’t an option. 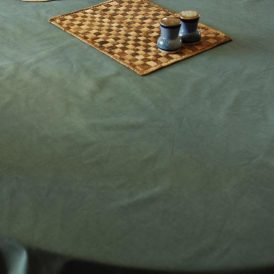