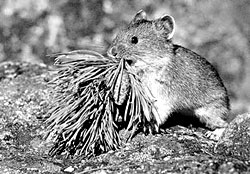 US Geological Survey/AP
QUITE A MOUTHFUL: Pikas, hamster-like rodents that dwell in mountainous regions, are as adept at staying out of the mouths of predators as they are at getting things into their own. They throw their voices to confuse swooping eagles. It's just one of many tricks animals find crucial to their survival.

Animals in the wild kingdom are crafty – they have to be. Without knowing a few tricks, they would soon perish. The peculiar skills some animals employ to ensure their own survival are quite unique.

The partridge is a bird that acts as well as any actress to protect its young. When a person or animal comes too near one of the bird’s hidden nests, the partridge will promptly step out where it can be seen. It will hobble along pretending to be injured, dragging its wings as if they were broken. The bird will manage to stay just beyond reach, until it has lured the threat to its young ones away. Then, it will take flight.

The pika is a small rodent that inhabits the Rocky Mountain region. This animal saves its life by using ventriloquism.

The pika’s chief enemy is the eagle. When the rodent spots one of these mighty birds, it heads for rock, bush or burrow. From this vantage point, the clever creature throws its voice. The eagle will hear the shrill cry and pounce on the spot where the sound seems to be coming from – but the mighty bird will find nothing there.

When the voice comes from another place, the eagle pounces again. And so the hunt goes on until the tired eagle gives up and flies off in search of another victim.

Many wild creatures store food for the long, cold winters. If anything should happen to the food that they stored, they wouldn’t make it through the winter.

The red squirrel stores its food in this way. Blue jays can make things difficult for them, however, for these birds are thieves.

A blue jay will follow a red squirrel to see where it stores its food. When a squirrel finds a place to its liking, it will dig a hole, put its food in, cover the hole and leave. When the squirrel is barely out of sight, the blue jay will hop out of hiding and unearth the cache.

This may go on for some time, but eventually the squirrel will get wise. It will make a great show of burying a load of seeds or nuts, give the covered hole one or two final pats and scamper off. Then the blue jay will fly down and dig in the spot – but find nothing there. Meanwhile, the squirrel will have had time to go and find a new hiding place for its winter food.

Perhaps one of the oddest tricks employed in the animal kingdom is the ingenious defense maneuver used by certain crabs. These underwater creatures go about carrying sea anemones in their claws.

Sea anemones are creatures that resemble brightly colored flowers. They are actually deadly marine animals, their bodies studded with thousands of stinging organs that can kill small sea creatures.

Armed with these deadly anemones in their claws, the crabs are able to explore the ocean floor unharmed. Only the most foolish of creatures would dream of attacking them. 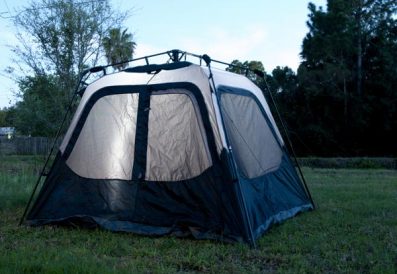