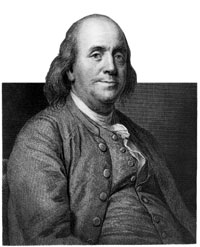 In 2006, our nation celebrates a birthday special to Americans – the 300th birthday of Benjamin Franklin, the only Founding Father who signed all four of the documents that created our republic: the Declaration of Independence, the treaty with France, the peace treaty with Britain, and the Constitution. As a statesman, Franklin stood in the front rank of the men who built the United States.

Benjamin Franklin was born in Boston on January 17, 1706. He was the 15th child and the youngest of 10 sons in a family of 17 children. His parents, Josiah and Abiah Franklin, were hard-working, God-fearing folk. His father made candles and soap in his shop. Franklin attended school in Boston for only two years. He proved excellent in reading, fair in writing, and poor in arithmetic. Josiah Franklin could not afford further education for his son, so young Benjamin became a printer under his brother. They could not agree, and when 17 years old, he ran away and found work in Philadelphia.

Franklin’s schooling ended, but his education did not. He believed that ‘the doors of wisdom are never shut,’ and he continued to read every book that he could get.

He spent some time in London, but returned to Philadelphia, opened a shop of his own, bought a newspaper and became a prominent citizen. Through him, the police and fire departments, a library and an academy were organized. He helped establish Pennsylvania’s first university and its first public hospital. Some of this he did for profit, but other acts were intended for the public good.

Among the things he invented were an efficient heating stove, bifocal lens for glasses, and the lightning rod. Of his experiments, his most notable is that he proved that lightning is electricity.

Franklin’s attendance at the Constitutional Convention was his last major public service. However, his interest in public affairs continued to the end of his life.

Franklin led all the people of his time in his lifelong concern for the happiness, well-being and dignity of humanity. George Washington spoke for a whole generation of Americans in a letter to Franklin in 1789: ‘If to be venerated for benevolence, if to be admired for talents, if to be esteemed for patriotism, if to be beloved for philanthropy, can gratify the human mind, you must have the pleasing consolation to know that you have not lived in vain.’

Franklin’s name would almost certainly be on any list of the half-dozen greatest Americans. His face has appeared on postage stamps, and on the coins and paper money of the United States. He died in 1790, after a busy and useful life. His autobiography is often read in schools as a specimen of good English, and his ‘Poor Richard’s Almanack,’ full of wise sayings, was very popular when published, and it, too, is still read.

How to Save Thousands When You or a Loved One Dies

Nothing stays the same in this world, and just as the small bookstore and the family hardware business, it is my opinion that the traditional funeral home may also be on the way out. 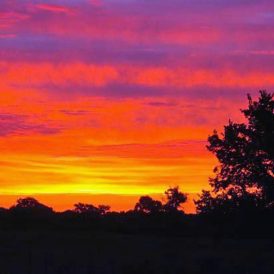