Keeping oneself busy during the fall and winter can seem like a daunting task for those of us who are used to being on the go all the time. I do believe that is why so many people in the towns and cities of this great country got hooked on television. (Only my opinion.)

In my household when I was young, even though we lived in town, we didn’t watch television. In fact, we didn’t even own a television until I was about thirteen. So when I started going to Junior High School and High School and the teachers gave us assignments once in a while where we were supposed to watch some documentary relating to history, I would not be able to complete the assignment because we didn’t own a television. Finally, she broke down and got one. Complete with rabbit ears!

Before this I always found things to do to keep myself busy – besides the obvious chores – and often wondered how the other girls found so much time to go to the movies, etc. after their chores were done. That was when I found out that not everybody had the same chores I did.

My most important chore was chopping the wood and bringing it in. You see, we had wood heat, not natural gas or oil. My mother also had a wood cook stove in the kitchen that sat right beside her electric range. She used that wood cook stove in the winter and it would heat up the back part of the house plus she didn’t have to pay for the electricity to use the electric range. She was on a very tight budget so she did what she could to conserve as much as possible. I remember walking home from school and chopping the wood before we ate dinner, or I did my homework. That usually took a couple of hours to make sure there was enough wood cut for the night and the next day, and there was kindling for starting the fire in the morning.

I had a girlfriend whose older brother decided one day that there was no way I could cut more wood than he could. He had never chopped wood before and didn’t know how to tell which pieces would split the easiest or anything. I had been doing this for a few years by then and knew how to tell by looking at it which chunks were dryer than the others and would split the cleanest and easiest. (I guess it was that teenage ego kicking in.)

Anyway, he challenged me to see who could chop the most wood in a specified length of time. I do not remember how long now, but I agreed. I knew I had him beat. I was at their house so we walked on up to my house and I opened the garage doors revealing an almost empty garage. It was early spring by then and so most of the wood had been used over the winter. I grabbed an axe and handed him one and rolled the big old chopping block out into the driveway. Of course, my mother had to come out and see what we were up to. When I told her what we were doing she only shook her head and laughed, and walked back into the house.

He decided to be chivalrous and let me go first. I was the girl, after all! So I looked over a few chunks of wood and chose one that had a nice crack on one side. I knew it would probably split with one or two good hits, if I placed the axe just right. Then I proceeded to split it with one good, solid hit! His turn, now. Having no clue what he was doing, this kid walked up, looked around a second, and picked up a nice piece of wood with no cracks or blemishes of any kind. By the third hit it still hadn’t split. In fact, he had the axe stuck and couldn’t get it out.

I only made it worse by taking the axe away from him and freeing it from the confines of the wood, thoroughly embarrassing him in front of his sister. And my mother. I know she was watching to make sure no one got hurt. After all, he had never used an axe before. Then, I tried to explain to him how to pick the easiest wood to split – and then showed him by splitting another good sized chunk with only one or two hits. I guess that was more than his young ego could handle, because he turned and hurried off down the street.

Neither one of us ever talked about the incident, but I know it bothered him for a long time. In school, he would actually turn and walk the opposite direction if he saw me walking toward him in the hall. This was my first lesson in getting along with boys. I didn’t realize it then, though.

I guess I got my work ethic from my mother! 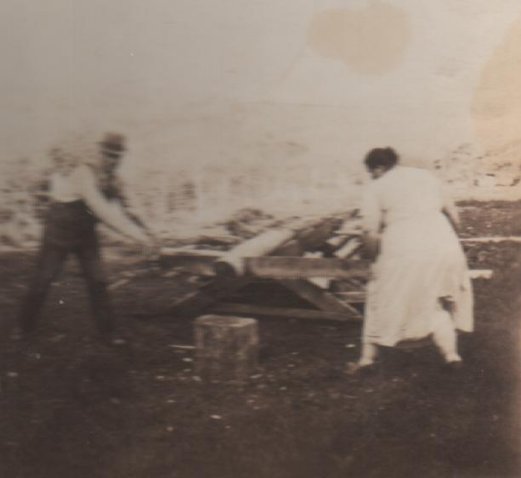 My mother with her first husband.