Boys In The Fruit Orchard

When my brother was growing up, our mom and dad owned a peach orchard in the Lewiston Orchards, Idaho. (It was actually called that then, too.) This picture shows him when he was still young helping them in the orchards by carrying the weeds – and probably pulling them, too. At that time it wasn’t against the law for children to help their parents. 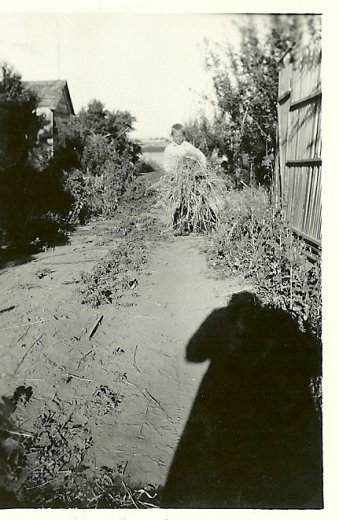 I was at my cousin, Emery Taylor’s, house last year and we were talking about some of the old picture’s my brother, Ron, had given me. I mentioned the one above with Ron carrying the weeds and the one I have of my uncle’s and my dad building a house in the peach orchard for one of the uncles to live in. I guess there weren’t a lot of regulations or building codes back then, either.

Emery started giggling and told me about the time he had been sent over to my mom and dad’s to stay with them for a couple of days because his mother had gone into labor. His parents didn’t feel it was appropriate for a young boy to see a woman giving birth.

This one particular day Ron and Emery were out in the orchard playing and my dad had turned the water on to irrigate the peach trees. As he walked along the bottom of the ditches making sure there was nothing blocking the flow of water to the trees, he came upon this one ditch that was bone dry. There was no water flowing in it at all. He walked up the ditch trying to locate the obstruction so he could get the water flowing again.

However, I do not believe he was prepared for the obstruction he found. Two boys with dump trucks and cars and logging trucks and everything! Yep, you got it! My brother, Ron, and my cousin, Emery, were playing cars and had built a really nice little town complete with a lake. And, they had built a dam across dads’ irrigation ditch to fill that beautiful little lake with water.

Now they were having a ball, but dad didn’t think it was funny at all. Mind you, this was in the 1940’s when it was still legal to spank your kids. Especially when they were messing with your fruit trees! If that was this day and age, it would have been a virtual town, with a virtual lake and virtual cars – drawn on a computer in other words. Of course, they wouldn’t have gotten a whippin’ either. And on that particular day Ron and Emery’s punishment wasn’t virtual, either. He said it took a while for mom to let them live it down, too.