After we’re done planting garlic and tilling in leaves, the last thing we do to put the garden to bed for winter is planting our cover crop: winter rye. 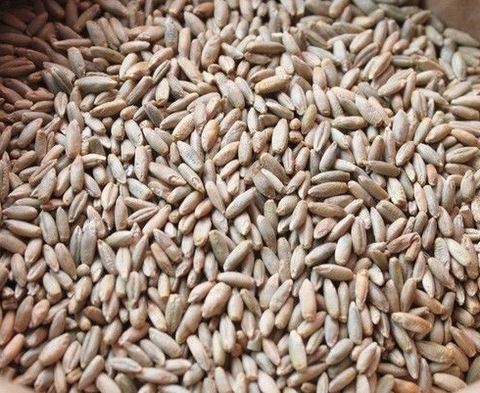 There are many types of cover crops. Those used in our area include annual ryegrass, winter rye, winter wheat, oats, white clover, sweet clover, hairy vetch, and buckwheat. We plant winter rye because it is one of the few that can be planted so late in the year. And although we plant it probably a bit on the late side, it seems to work.

Our garden stays productive through November. Even now we are still harvesting beets, bok choi, swiss chard, lettuce, collard greens, and broccoli. Because our remaining crops tend to be scattered throughout the garden it’s not easy to get in there and till. Jim waits until we’ve pulled out most of the plants and then tills all the leaves from our property and from our neighbors as well. Any cover crop that has to be planted even as late as the end of September would not work for us. Rye can be planted at the end of October or early November in our area.

Planting winter rye is easy – we just scatter seeds and rake them in. It’s also very cheap, we paid $.59/lb this year and used less than four pounds.

Because we have clay soil, after a summer rain/dry cycle the ground in our garden can be as hard as cement. Growing a cover crop helps loosen up that hard pack. Jim works the rye back into the soil in the spring, adding this “green manure” to our soil.

Last year was our first time growing winter rye. We were a little nervous because we had read stories online about people who had winter rye that grew to 3’ high and then it came back again and again after they tilled it in. We were also aware that if we had a really rainy spring we wouldn’t even be able to get the tiller in there to turn it over. But in the end it worked out really well. It did come back after the first time Jim tilled it in but after the second tilling it was only a handful here and there.

You can generally find cover crop seeds at your local farm and garden store. We’re fortunate in that the local Agway carries them in bulk. We love any excuse for an outing to that store, anyway … we’re like kids in a candy shop there. Odds are that it’s too late where you are to put in a cover crop for your garden, but there’s always next year!