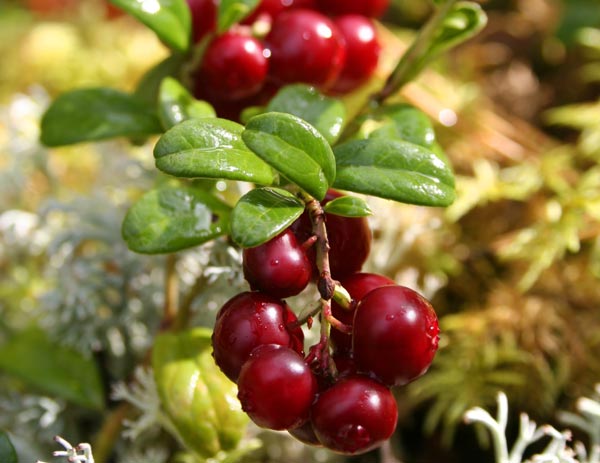 Before long, my plate will be piled high with all the fixin’s – turkey, stuffing, potatoes and gravy, pumpkin pie and cranberry sauce. It’s a traditional meal for a traditional American holiday. I’ve often wondered why cranberries were part of the tradition; after all, many people don’t like the taste of them. I’m not a cranberry lover, but I do partake of the berry on this occasion – because it’s traditional.

Vaccinium macrocarpon, or American cranberry, is truly an American plant, native only to North America. It grows from the eastern provinces of Canada, down the East Coast of the United States to North Carolina and west to Michigan and Minnesota. Bogs and swampy areas of these regions are where the plant can be found growing wild.

American cranberry is a trailing perennial vine with evergreen leaves. Because of its native habitat, it stands to reason that the cranberry prefers a moist root system. It grows in an acid soil, one that has a pH of 4.5 to 5.

It’s amazing to me, as a horticulturist, that fields are flooded twice a year in cranberry production. The plants are submerged during the harvest. By flooding the plants then, the vines can be shaken to free the berries. The berries float to the surface, are seined off – harvested using seine nets – and sent to market. During the winter, the plants are encapsulated with ice to insulate them and allow them to over-winter.

Northern regions of the country are where the American cranberry grows best; the plant does not like the summer heat of the South. Even having said this, I know that the cranberry can be grown in my native Kansas – maybe as more of a novelty than anything else.

To grow cranberries in a warmer climate, I recommend containers. Mix half soil and half peat moss for the growing medium. This mix will allow moisture retention as well as providing a low pH balance. Cranberries prefer a soil that is too acidic for most landscape plants. Planting cranberries in containers also enables a gardener to move the plants to a cool area during the hot part of the day; they like the sun, but not the heat.

For gardeners who would like to grow cranberries but don’t want the hassle, I recommend a plant that can be grown in all but the southernmost portions of the country. Viburnum trilobum, or American cranberrybush viburnum, is tough, durable and attractive, and it produces berries. Although not a true cranberry, berries from American cranberrybush do resemble them. They are edible and can be used for jam and jelly.

American cranberrybush is also native to North America. The shrub grows 8 to 12 feet tall and has a similar spread, so it needs room to sprawl. In early spring, a cluster of 4-inch-wide, white blooms adorn the plant. They are followed by a cluster of bright red berries in mid-September. The foliage of the American cranberrybush is a lustrous dark green in summer. Cool fall temperatures change it to a reddish-purple hue.

There are cultivars of American cranberrybush that have been selected for their fruiting qualities. Wentworth, Hahs and Andrews are selections that have larger fruit. They can be found at specialized stores. There are also cultivars that have been selected for the dwarf size of the plant. Compactum is one of the dwarf selections. The size of the plant is about half the size of the native species. Compactum may be a more suitable size for the home landscape, but do not plant this one for the fruit, because it rarely sets any.

I have not made jam out of American cranberrybush berries, but I’ve read that the berries emit a musty odor when they cook, which some people find objectionable. I’ve also read that adding slices of orange or lemon peel during cooking will alleviate the problem.

Personally, I’m pleased to do my American duty and consume cranberry sauce once a year. I’m going to skip making my own jam, though, and just enjoy the plants.

Happy Thanksgiving to all!