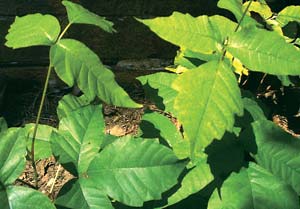 LEAVES OF THREE: Knowing what poison ivy looks like is the best way to avoid its cursed, itchy spell.

If you’ve had poison ivy dermatitis, you’re among millions. Being immune one year is no guarantee you won’t be sensitive the next.

Knowing the enemy by sight can help you avoid it. The green leaves – often shiny on top and slightly hairy underneath – always appear in clusters of three. (Remember this: ‘Leaves of three, let them be.’) The leaves have either smooth or slightly toothed edges, each with a pointed tip. The middle leaf at the end of the stalk is slightly longer than the others.

The most common form of poison ivy is the climbing vine variety, which thrives in woods, fields, thickets and along fences. It wraps itself around trees and telephone poles, and it can grow up walls. When there is nothing to attach itself to, it takes the form of a shrub or bush, and it can live in dry areas, pastures, around rocks and near water. In this form, it’s frequently referred to as poison oak. In other areas, it is called poison sumac when it becomes a small tree.

What causes the violent skin reaction to the plant is a yellowish resin containing a chemical called urushiol, which is found in the plant’s leaves, stems, bark, roots, flowers and berries. The milky-to-clear sap is not on the surface of the leaves, but appears whenever the plant is broken, cut or bruised. It takes little to cause a severe inflammation, and the slightest brush against any part of the plant can result in a painful irritation. While you must come in contact with urushiol to get a rash, the sticky resin can be carried to your skin from domestic animals, clothing or any object that has touched a broken or bruised poison ivy vine or plant.

The first symptoms of the rash are reddish streaks, blotches and clear blisters. They usually show up in 12 to 24 hours.

Fortunately, the rash is not contagious. Although you can’t get it by touching someone who already has it, people who still have the oil on their skin can transmit the rash to others.

Spreading poison ivy to different parts of the body is usually the result of touching one area with another soon after exposure, while the resin is still on the skin. Once the rash develops, the urushiol has already penetrated, and it will not spread.

Eating the poison ivy leaves won’t make you immune to the plant, but it can result in a serious reaction – and even death. Like the common cold, there is no sure cure for poison ivy, but there are ways to achieve some relief. Sometimes the rash can be minimized if the exposed skin is washed with a strong alkali soap soon after contact. Another remedy is to swab the affected area with a mixture of equal parts of vinegar, buttermilk and salt.

While there are many home remedies and commercial preparations to ease the maddening itch, severe reactions require a visit to a physician. He or she can prescribe a cortisone cream or antihistamine to help relieve itching.

If you get caught up in poison ivy, wash it off as quickly as possible, even if it means finding a local stream. If you’re at home, use the garden hose. Or carry wipes, as do many hikers and campers. You should also wash your clothing and anything else you suspect of contamination.

Your property can be ridded of poison ivy in a couple ways. If the soil is loose enough, you can lift up long sections of roots with a garden fork. (The best time is after a rain when the soil is soft.) Poison ivy is tough, though, and it won’t give up without a fight. Another tactic is to apply an herbicide when the vine is in full leaf.