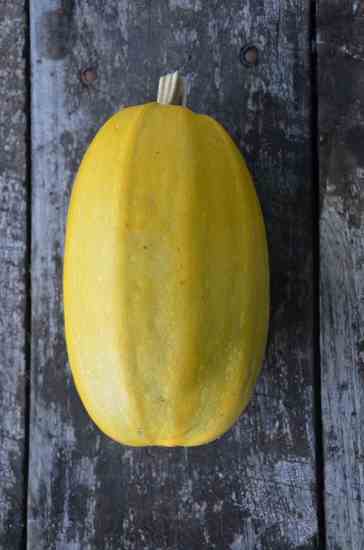 A spaghetti squash is ripe for use when it has turned slightly golden in color.
Photo Courtesy Workman Publishing
2 / 3 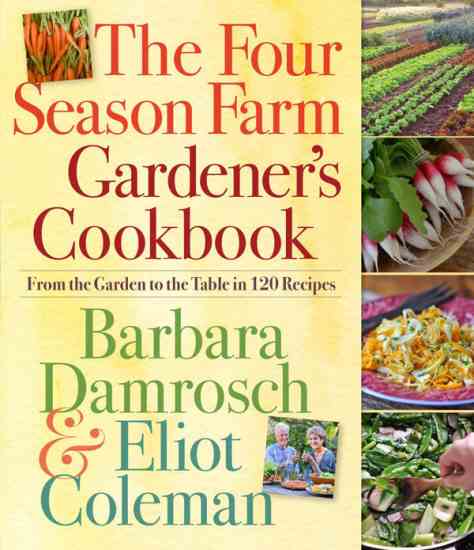 Find recipes as well as growing and harvesting tips for the ingredients in “The Four Season Farm Gardener’s Cookbook.”
Cover Courtesy Workman Publishing
3 / 3 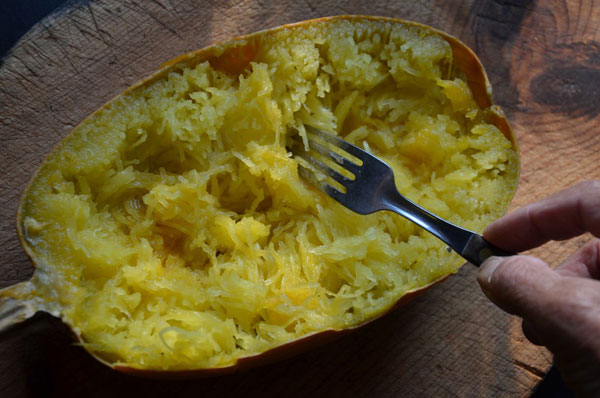 Spaghetti squash might look like vermicelli, but it is distinctively vegetal — tender, with a bit of a crunch, and just slightly sweet.
Photo Courtesy Workman Publishing
❮ ❯

The Four Season Farm Gardener’s Cookbook (Workman Publishing, 2012) combines two books — a garden guide and a cookbook — in one. Authors Barbara Damrosch and Eliot Coleman show you how to grow, harvest and store the very ingredients used in their recipes. This recipe was taken from chapter 13, “Earthy Vegetables.”

You can purchase this book from the CAPPER’s store: The Four Season Farm Gardener’s Cookbook.

In my view, spaghetti squash is an underused and often misunderstood vegetable. It’s quite a wonderful thing: The tendency toward stringiness, characteristic of some hard-fleshed squash, has somehow been turned into an asset. The result is an interior that, when cooked, breaks into delicious spaghetti-like strands.

But I think the analogy with spaghetti can be taken too far. This might look like vermicelli, but it is distinctively vegetal — tender, with a bit of a crunch, and just slightly sweet. To me it does not call out for an aggressive red sauce, and the idea of pawning it off on your child as pasta insults his or her intelligence. I’m usually satisfied with just butter (lots of it) and salt and pepper, but the treatment here is a special-occasion departure with, I admit, a little Northern Italian influence. Serving it directly from the squash skins makes a fun and unusual presentation, but if you prefer, you can scoop the flesh out of the skin and serve it in a warmed shallow bowl or baking dish.

A spaghetti squash is ripe for use when it has turned slightly golden in color.

1. Place the squash on a cutting board, and with a large heavy knife or a cleaver, cut it cleanly in half lengthwise. Remove just the seeds by scraping them out with a spoon, leaving all the stringy flesh in place.

2. Sprinkle the olive oil over the bottom of a rimmed baking sheet. Place both squash halves on the baking sheet, cut side down, and slide them around to coat their cut surfaces with the oil. Bake until tender, 45 to 50 minutes — but start testing for tenderness after 30 minutes by flipping the squash over and poking it with the tip of a knife or a skewer, to see if it has softened inside. Some spaghetti squash cook faster than others, and if left in the oven too long they can turn watery.

3. Remove the baking sheet from the oven but leave the oven on. Set the squash halves cut side up on the baking sheet, and loosen the flesh by running a large spoon very gently just inside the skins, trying not to tear them. Then pry up and fluff the flesh lightly with a fork to separate it into strands, leaving the strands in the squash shells.

4. Melt the butter in a small saucepan over medium-low heat. Add the garlic and cook until it has browned slightly, 1 to 2 minutes.

5. Pour the butter and garlic over both squash halves. Then add the sage, salt, and pepper. Stir gently to mix. Sprinkle the cheese over the top of both halves, and return the baking sheet to the oven. Bake until the cheese has melted, 5 minutes.

6. Using two large spoons, or a spoon and a spatula, gently lift the squash onto a platter. Serve hot or warm, scooping the strands out of the skins. Baked Spaghetti Squash Recipe with Cheese serves 4, or 6 as a side dish.